Phones in Class: What’s the Sitch?

How much can a phone really affect students’ learning in class? As any student would notice, at the beginning of the school year teachers go over a “no phones in class” type of speech. They talk about how its not them, it’s the school board’s fault and how if they see it they will take it. Though, if students weren’t given this lecture, would it be so bad?

Allowing phones in class would make students more responsible for their own education. It would be the students’ choice to pay attention, learn, and pass the class and it would allow for more independence. Phones in class could actually help with class discussion. Many teachers have a hard time getting their students involved, but many times it’s because the students don’t know the information well enough to hold any opinions. With phones offering quick access to the internet, students can quickly familiarize themselves with the content and become more engaged in the conversation.

Some may say that allowing phones in class is too much for any average teen to handle, especially with their addictive relationships with their phones. More than half of all teens are addicted to their phones and/or other things. Though older generations can’t blame teens for being addicted because they were raised in a world run by cell phones. “By the time they [Generation Z] were in their teens, the primary means by which young Americans connected with the web was through mobile devices, WiFi, and high-bandwidth cellular service,” says Michael Dimock of Pew Research Center in an article about defining generations. Gen Z is defined by not remembering a time without the internet. All that teens know are phones. Cell phones can be snuck almost anywhere and used with or without data. Companies are constantly improving their technology to make people not want to put their phone down. 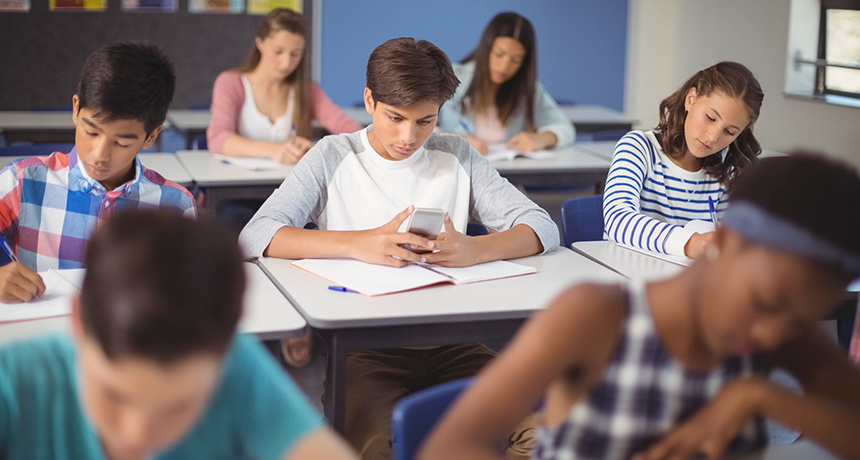