The Thunderbird High School Volleyball Team had a great opening to the 2019 season, winning their first two matches against the Mingus Union Marauders and the Washington Rams. Volleyball has had amazing seasons in the past and now the Volleyball team of 2019 wants to show the high school scene that they are a team that is not to be messed with. This was evident in their first home match against Poston Butte High School.

The girls have been preparing themselves for their first home match ever since the beginning of the season on September 3rd. On September 10th, the girls’ skills were put to the test. While it seemed that the Poston Butte Broncos would declare victory at some points of the match, the Chiefs showed them that they would not be defeated. The Chiefs made a comeback and defeated the Poston Butte Broncos with a score of 3-2, a close match that had everyone on the edge of their seats.

Two days later, the girls traveled to Marcos de Niza High School to face off against the Padres. The Chiefs hoped to continue their winning streak and defeat the Padres, but the opposition had other plans. Ultimately, the Chiefs went home with their first loss of the season, the Padres winning 1-3. On September 14th, the girls decided to participate in the Ceil Billings Volleyball Tournament hosted by Greenway High School. The girls faced off with the Maricopa Rams and unfortunately lost 1-2. After, the Chiefs went against the Horizon Honors Eagles for the second match-up. However, the Chiefs were dealt another defeat, the Eagles winning 0-2. Thunderbird had their last match-up against the Central Bobcats and were dealt their final loss of the tournament, the Bobcats winning 0-2.

On September 17th, the girls hosted Saguaro High School at home and were determined to put another victory under their belt. However, their opponents had different ideas. The Saguaro Sabercats defeated the Chiefs, winning 0-3. A day later, the team hosted Mesquite High School for another home game. In the beginning of the first match, the girls were unstoppable, dealing blow after blow to the Mesquite Wildcats, eventually winning the first match with a score of 25-15. The girls’ hopes were high and they moved on to the second match. The Chiefs had a good start, however the Wildcats started to come back from their first defeat. Unfortunately, the Wildcats won the second round with the final score being 20-25. In the third round, the Wildcats gained momentum, having an early lead. Nevertheless, the Chiefs started to fight back and caught up to their opponents, even tying the match 24-24. However, the opposition gained back their lost momentum and won the third round with the score being 24-26. Even though the girls lost the third round, they still had a chance to make a comeback. Moreover, T-Squad emphatically kept on supporting the team, chanting “We still love you!” even though the girls lost the third match. In the fourth match, the spectators, supporters of Thunderbird and supporters of Mesquite, held their breath to see if the game would go into a fifth round. The Chiefs tried their best to come back from their two previous losses, but the Mesquite Wildcats diminished those hopes quickly. The opposition won the fourth round 19-25, resulting in Mesquite High School defeating the Chiefs 1-3. While the Chiefs lost this match-up, T-Squad and the home crowd kept cheering and encouraging the girls until the very end.

On Tuesday, September 24th, the girls journeyed to Coconino High School to face off with the Panthers. While the girls tried their hardest to defeat their opponents, the Coconino Panthers won the match-up 1-3. One day later, the Chiefs had another away game, this time they traveled to Canyon View High School to play the Jaguars. Unfortunately, the Canyon View Jaguars defeated the Chiefs 0-3. On September 26th, the Chiefs hosted Tempe High School at home and were full of adrenaline, hoping to break their losing streak. In the end, the Tempe Buffaloes were given a loss, the Chiefs winning 3-0. On September 30th, the girls traveled to St. Mary’s High School to extend their wins. However, the opposing team had other plans. Unfortunately, the Chiefs went home with a loss, the Knights won the match-up 1-3. However, a day later the girls’ fortunes changed when they traveled to Moon Valley High School to face off with the Rockets. The Chiefs defeated the Rockets in a 3-0 blowout.

On October 3rd, the girls hosted Shadow Mountain High School at home for the day’s match-up. The home crowd and  the athletes were all wearing pink since October is Breast Cancer Awareness Month and Thunderbird wanted to bring attention to the issue during the game and show their support to survivors of breast cancer and those who are currently going through the disease. The match-up began with the Chiefs and the Matadors in a close first set with both teams keeping each other on th

eir toes, hoping to gain an advantage. While the girls gave their best, the Matadors won the first set in a close 24-26 victory. The second set saw the Matadors achieve another victory, this time the score was 19-25. The Chiefs wanted to make a comeback and show the home crowd that they were capable of sending the opposition home, but the Matadors ended that hope in the third set. The Matadors won the third and final set with a final score of 15-25. This resulted in the Chiefs losing this home match-up 0-3. 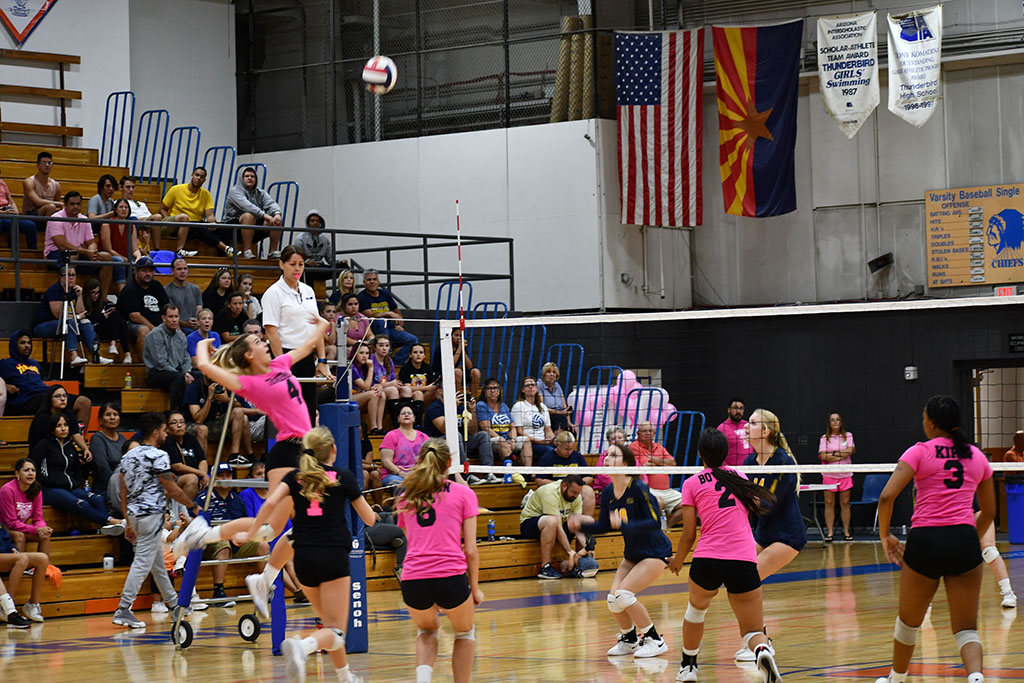 Currently, the Thunderbird Volleyball team has an overall record of 5-7, are now fourth in the 4A Skyline rankings, and rank twenty-seventh in the 4A division. On October 15th, 2019, the girls will travel to Tempe High School to face off with the Buffaloes once more. The team is hoping to get back to the top and dominate the court once more.