Last we left off, the volleyball team lost to the Shadow Mountain Matadors 0-3 on October 3rd. However, the girls are more motivated to get a win when they went up against Tempe High School on October 15th. The Chiefs traveled to enemy territory, ready to fight their way to a win. Fortunately, the Chiefs defeated the Buffaloes in a landslide 3-0 victory over the opposition. Their loss earlier to Shadow Mountain motivated the team to defeat the Tempe Buffaloes and it paid off. One day later, the girls held a home game against the Greenway Demons and the team was prepared to send them back home with a loss. Unfortunately, the Demons had other plans and defeated the Chiefs in a shocking 0-3 victory over Thunderbird. However, the girls were not disheartened by this loss, only focusing on their next match-up against the Moon Valley Rockets on October 17th. The Chiefs faced off with the Rockets and the competition was fierce, with both sides keeping each other on their toes. In the end, the Chiefs defeated the Rockets in a perfect 3-0 win. Five days later, the Thunderbird Volleyball team went up against Shadow Mountain High School for the second and final time. The Chiefs were ready to avenge their earlier loss to the Matadors. While the Chiefs gave the Matadors a run for their money, the Matadors unfortunately defeated the Chiefs in a 1-3 victory.

Two days later, the Chiefs held their last home game of the season. Moreover, this last match-up was senior night, so the game was even more emotionally packed. The home crowd came in full force, supporting the team throughout the match-up. The night started off with Coach Whitehead recognizing the three senior girls on the team: Brighton, Solheim, Emma Hicks, and Riley Kaczmarowski. 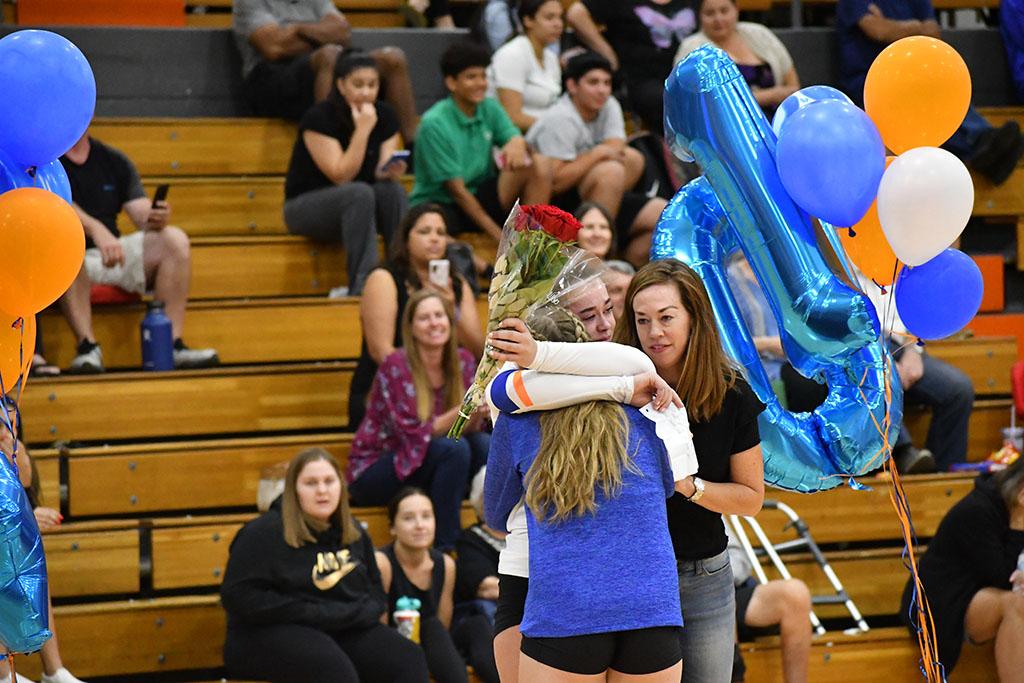 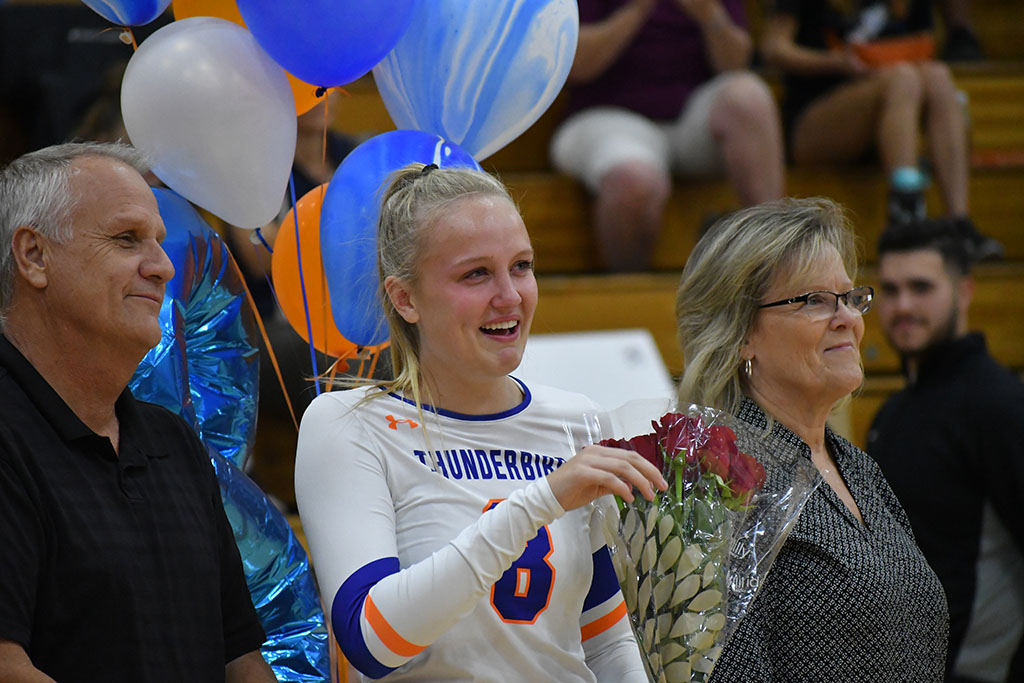 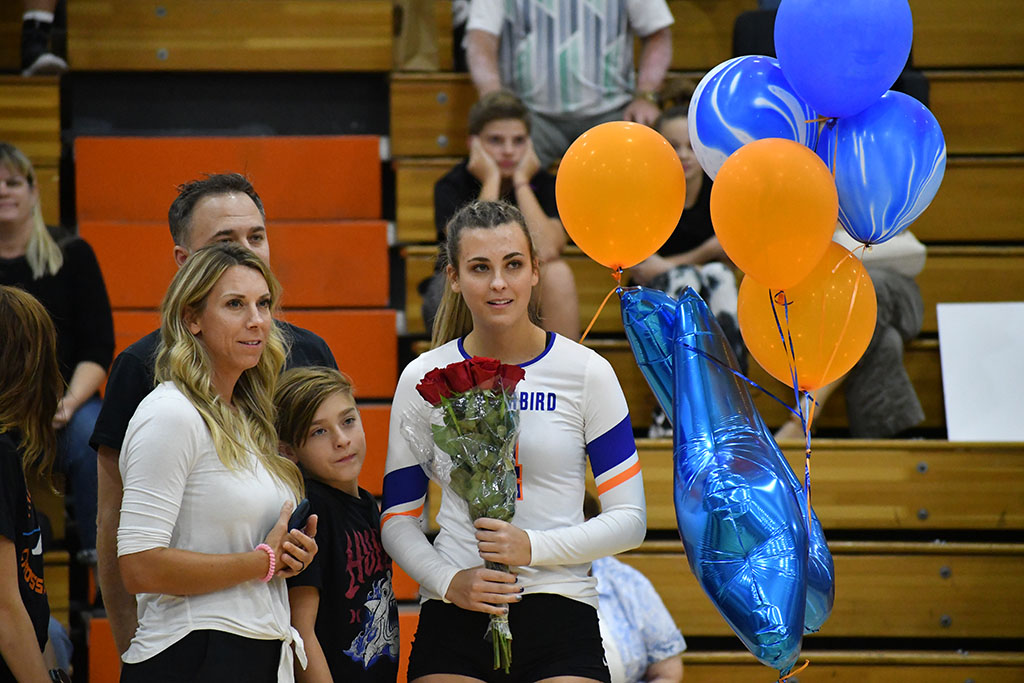 Their teammates gave each senior player a heartfelt message, encouraging them to follow their dreams and achieve greatness in college. The team was tearing up and you can see the raw emotion within. Soon after, the team warmed up and the match-up between the Chiefs and the Knights began. In the first set, the Chiefs came out with force, knocking the Knights off balance and resulting in Thunderbird winning the first set in a 25-22 victory. In the second set, the Chiefs came out ahead, but the Knights soon caught up and overtook the girls. As a result, the Knights won the second set in a 22-25 win. The third set saw both teams vigorously trying to outsmart and outmatch their respective opponents. Unfortunately, St. Mary’s won the third set 19-25. In the fourth set, the Knights were determined to end the match-up while the Chiefs were determined to carry on to the fifth and final set. Unfortunately, St. Mary’s had their wishes fulfilled, winning the fourth and final set 17-25. The girls went up against St. Mary’s and hoped to win their last home game of the 2019 season. Unfortunately, the St. Mary’s Knights defeated the Chiefs in an overall 1-3 victory. On October 29th, the Chiefs traveled to Greenway High School for their last official game of the 2019 season. The Chiefs and the Demons battled it out, but the Chiefs lost to the Demons in a 2-3 defeat. 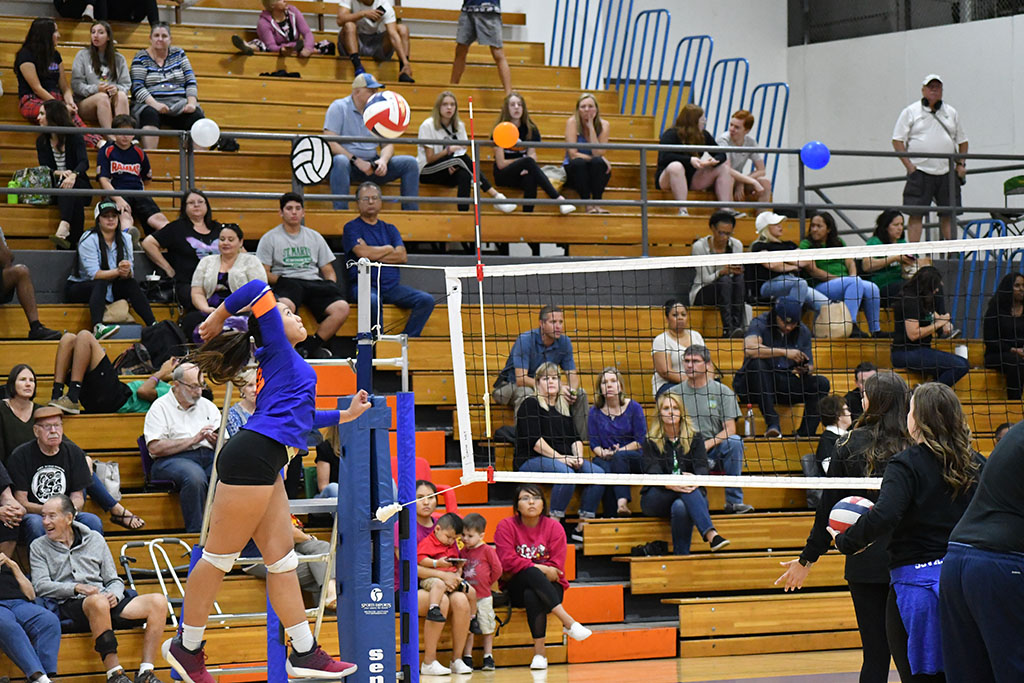 While the season has come to an end, the Chiefs are ready for the 2020 season to come around, wanting to improve themselves once more. In this season, the Chiefs placed fourth in the 4A Skyline rankings, placed twenty-eighth in the 4A Division, and had an overall record of 7-11. While the season had a rocky end, the team is determined to do better in the next season.