On Wednesday, February 5th, 2020, President Trump was acquitted on two counts of impeachment. Although the president was already technically impeached by the House of Representatives, this acquittal prevents his removal from office.

First, what is an acquittal? An acquittal is defined as setting someone free from the charge of an offense by verdict, sentence, or other legal process. This means that, with his acquittal, Trump is freed of the charges that he was impeached on.

This event represents the third impeachment trial of a president, as well as the third acquittal. In this trial, the senate voted on whether Trump should be removed from office or not. Because the Senate is made up of mostly Republicans, it came as no surprise that Trump was acquitted. In fact, only one Republican, Mitt Romney, voted for Trump’s removal from office. He was acquitted on two articles, the first of which being Abuse of Power, where the vote was 48-52. The second article was Obstruction of Justice, with a vote of 47-53. Marco Rubio justified his decision to vote against President Trump’s removal, saying, “Just because actions meet a standard of impeachment does not mean it is in the best interest of the country to remove a President from office. I will not vote to remove the President because doing so would inflict extraordinary and potentially irreparable damage to our already divided nation.”  Senate Minority Leader Chuck Schumer, D-N.Y., shows a very different view on the situation, saying, “[Trump] doesn’t learn any lessons. He just does what he wants, what suits his ego at the moment. Observers of the president would question whether he’s even capable of learning a lesson.” Although these votes were close, they were not close enough for Trump to be removed from office, and he was therefore acquitted. 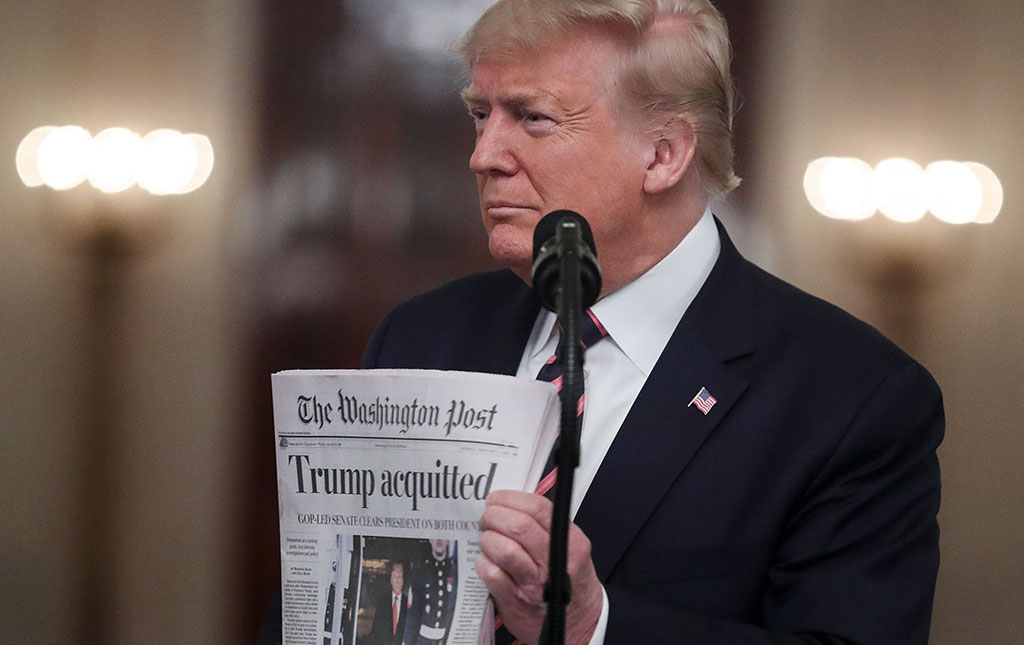 In reaction to President Trump’s acquittal, Democrats were outraged while Republicans remained unsurprised. Democrats say, “By refusing the facts-by refusing witnesses and documents-the Republican majority has placed asterisk, the asterisk of a sham trial.” Meanwhile, Senator Mitch McConnell of Kentucky, the senate majority leader, states, “We will reject this incoherent case that comes nowhere near justifying the first presidential removal in history.” Democrats still say that their battle to get Trump removed from office is far from over.

As one can see, the end of this conflict nowhere near ends the conflict between Democrats and Republicans that is seen in today’s politics, as Democrats won’t stop fighting to impeach Trump, and Republicans won’t stop believing that Trump is innocent. Whether each side is right or wrong, conflict will likely continue forever in this country.